O>M>G!!!!!! Did you survive that football game???? Talk about anxiety!!! What a game, huh???? The title of this blog may be misleading. We aren't "physically" going to the SuperBowl........like, we aren't going to Indy, we will be watching from home. :-) BUT, The PATRIOTS are going to the SuperBowl. Again. As my Dad would say, when the Pats go to the playoffs and make it to the SuperBowl, it helps the winter to pass by and not seem so long. I agee!
So, this morning Mr. S and I went out to capture some snow scenes. We headed Southwest and ended up in Halifax and Middleboro. A few of the images were converted to black and white (I'm really having fun with this) If the Pats lost the game, I was going to only post the black and white image because I would have been in a dark mood for sure. BUT, seeing as though they won, I will post both the color and the black and white for a victory celebration. :-) 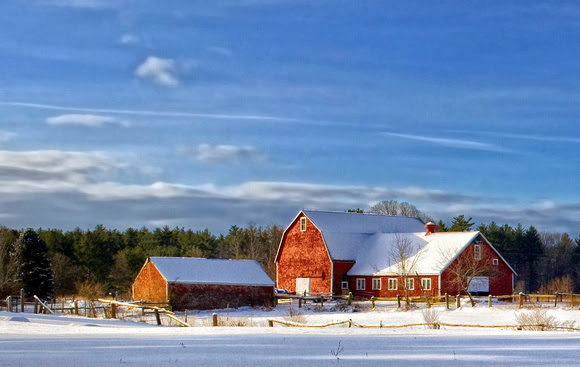 I chose a slightly different composition for the black and white image: 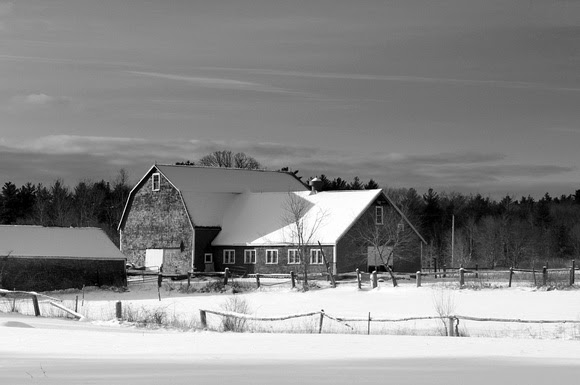 Day 306/Year 2
I'm really liking the contrast and sharpness I am getting with the new 17-55 mm lens. Oh, by the way, this image was taken on Thompson St. in Middleboro MA. I have driven by this barn dozens of times, but the light and conditions weren't right.......but this morning the light was just right and the snow was added an extra bonus.
Posted by Carol at 6:50 PM