Hello!!!!! I am home and decompressing after a fantastic week of shooting the foliage up in Northern New England. Mother Nature sure was fickle this year with the colors, but she finally gave us the colors we were craving by the middle of my trip. The first four days the colors were drab and mostly green. I was wondering if the entire season was going to be a bust due to the unseasonable warm temperatures we had experienced throughout most of September. But as you will see in furture blog posts, the colors came on strong and I was doing the happy dance.

Our first stop of the week was to the Cog Railway in Bretton Woods NH. This little train chugs all the way up to the top of Mount Washington. The only train that uses the steam engine was leaving the station at 8 AM.......which meant I left my house in SE MA around 4:30 AM to get there in time. The other trains are all run by biodiesel engines, and I wanted to see the steam rising from the steam engine. 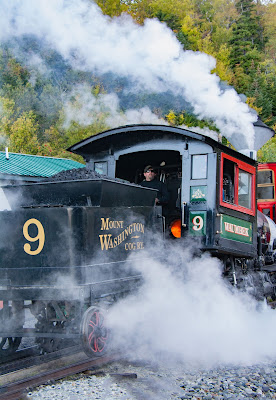 With a few blows of the whistle, she was off and began her long journey up the mountain. 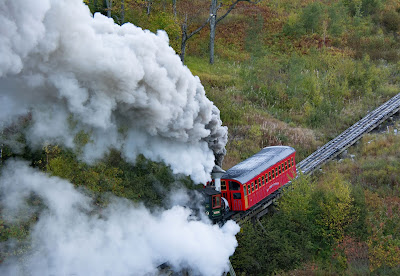 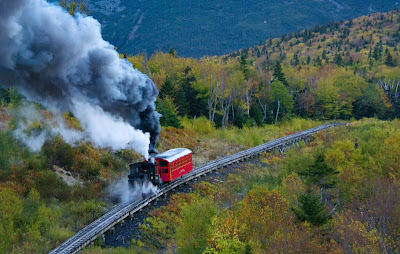 I particularly like this shot, as you can see the tracks leading up the mountain in the top right side of the image. 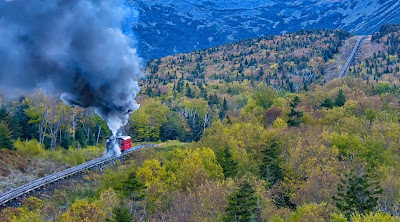 Once the train got higher than this it was shrouded in steam and was not visible anymore. What an awesome sight this was to see and capture with my camera. Afterwards we had our breakfast at the base building and headed North for the day to look for some color. There was little to be found that day.